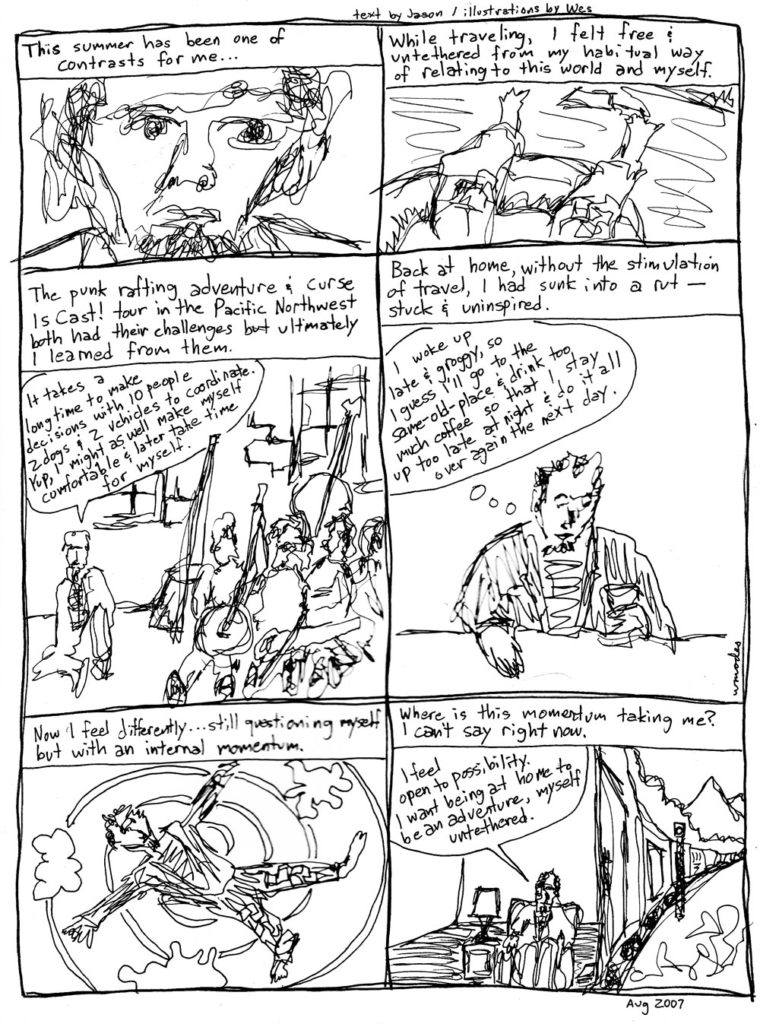 Years ago, Jason and I used to participate in an informal weekly get together at the Santa Cruz Diner that we called the Comic Collective.  We played silly comic-making games like Exquisite Corpse (a game I detest in its many forms), circulating collaborative comics, and so on.  Not really much different from when my high school friend Eric Hartman and I used to pass a comic note back in forth in U.S. History class, drawing each new panel in turn. To me, the results were always dissatisfying because they never resulted in any cohesive narrative or illustrative style, the two things that drew me to comics in the first place.

Somewhere, I have the entire Santa Cruz Comic Collective archive in the extensive comics library at the Redwood House.  It is impressive in its volume if not its narrative prowess.

In an attempt to revive the Comic Collective years later, Jason and I experimented with some different forms.  We traded off writing and illustrating each others stories.  This was more satisfying.  Having a single writer and a single artist, each comic had both a narrative consistency and vision as well as a visual consistency. 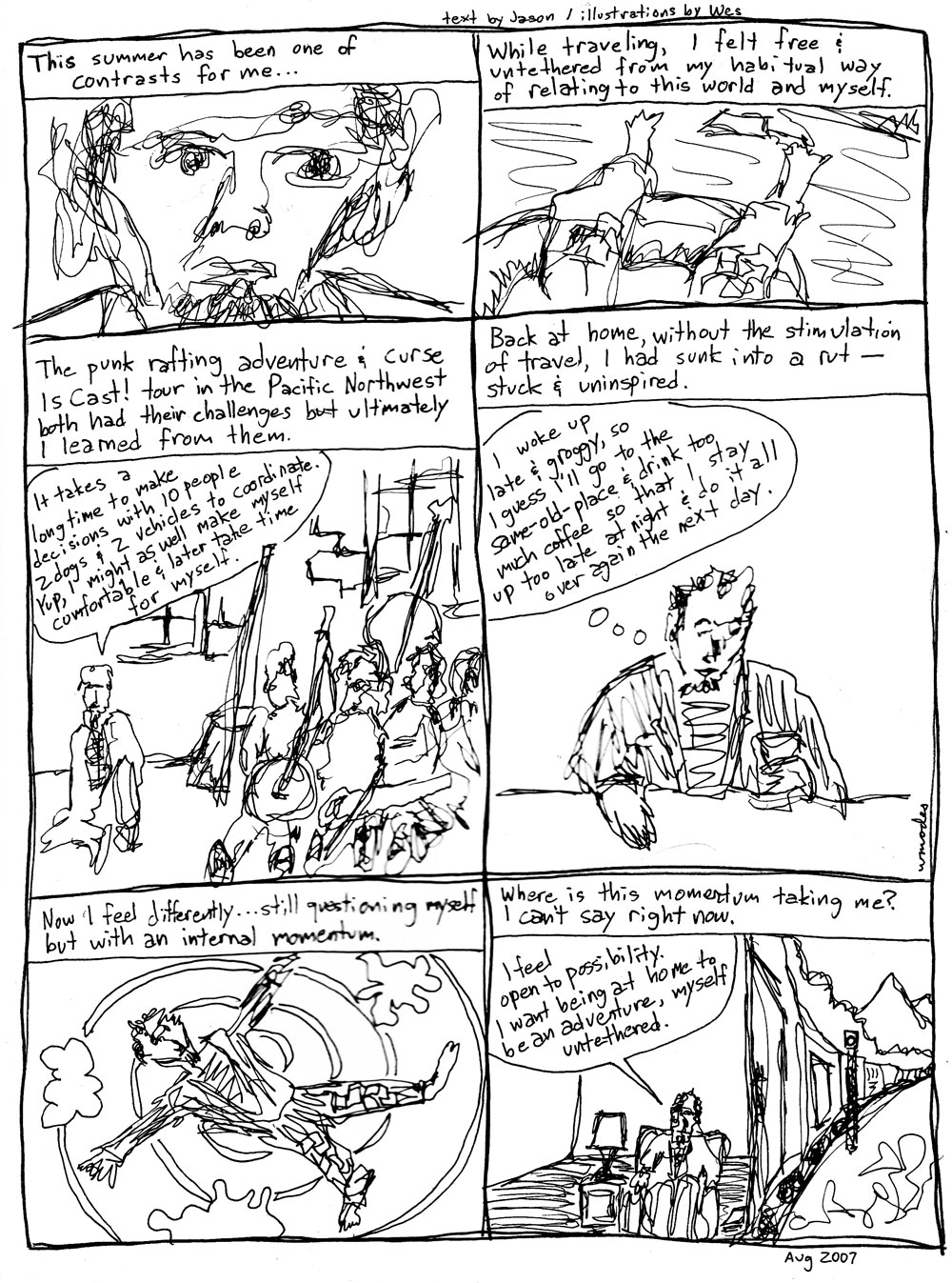 It is funny, because this echoed the real life comic industry in which writer, illustrator, inker, and colorer are often separate roles and talents.

In fact, when I did a collaborative piece for Paul Buhle’s SDS illustrated history with the late renowned Harvey Pekar as writer, Harvey furnished me with a sketchy scrawly napkin sketch complete with nearly illegible writing and basic stick figures.  I’ll try to turn up Harvey’s sketch.

Here’s the comic that resulted: 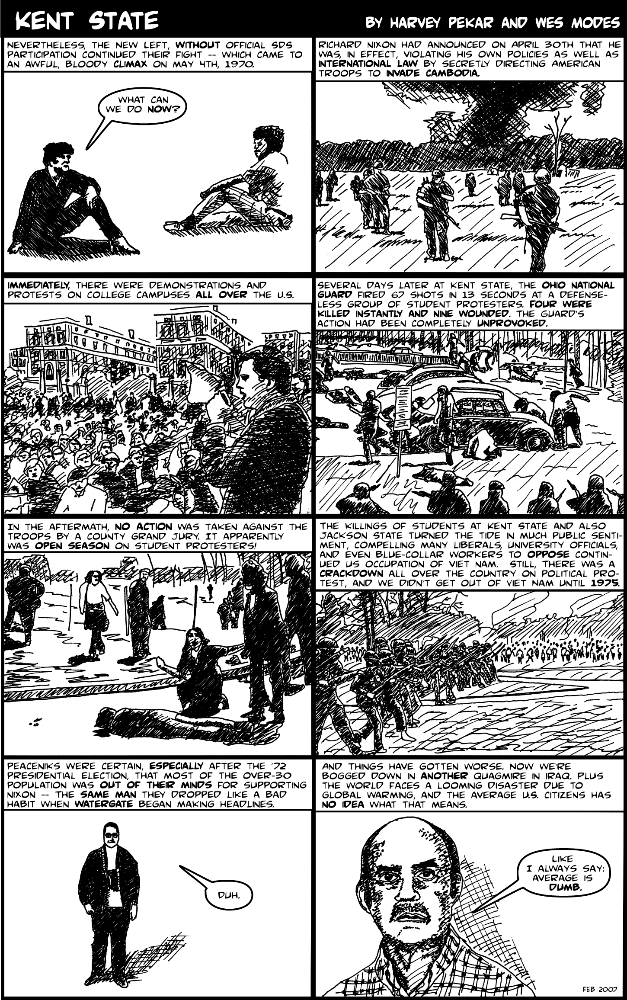 Baerie hosted the Comic Hangout through Free Skool Santa Cruz for quite a while, and I occasionally helped host.  It was less collaboration and more an opportunity to get together and encourage each others work.  It was good for me, as I managed to produce a page about every other week.  A lot of my one-page comics are featured on this site.

I want to do more comic collaboration.  There are so many talented storytellers and so many people who do great history research for whom I could illustrate.  Conversely, I’d love to have someone willing to illustrate my stories.  After 25 years in this town, I have experienced a lot of important local history that is constantly in danger of being forgotten to our peril.