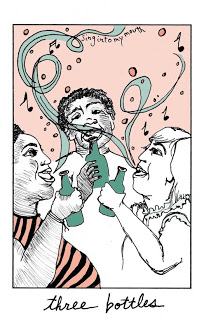 Ideally, I was imagining something that would be played by two or more people, maybe turn based, that would take creative input from players and guidance from a simple set of narrative generation rules and create a story.  Something like Exquisite Corpse, but with output that was narratively interesting.  Or similar to Kischka and my Guess What Game We Are Playing? game, but with a story rather than a game.

What would a game like that look like? Some random element? Mutual interaction between players of the meta-game and the evolving story? Some narrative rules?

Apparently others have thought of the Tarot deck as a story generator as well.

The Celtic Cross for Fiction Writers

A great article on using Tarot for Fiction Writing from http://tarotforfictionwriters.wordpress.com:

I thought I’d kick this blog off with a twist on an old classic – the Celtic Cross. My twist, the Fictional Cross, is a useful spread that I use to generate plot ideas from scratch.

The layout is the same as that for the Celtic Cross. You can use the standard Celtic Cross meanings to suggest a story scenario, but in my Fictional Cross variant I have altered the meanings slightly to fit in with a narrative structure. Let’s step through what each card means in the Fictional Cross:

S – The Significator card. Pick a court card that represents the personality of your protagonist. If you don’t have an idea for your main character yet that’s fine; separate out the 16 court cards (that’s the Page, Knight, Queen and King of each suit) shuffle them and pick one randomly. That’s your main character. You can refer to any good tarot book to find out what kind of person they are.

1 – The Centre card. This card is your protagonist’s attitudes and feelings at the point your story opens: their internal situation.

2 – The Crossing card. This is the external situation that your protagonist is in at the very start of the story.

Together these two cards suggest the stasis, the normality, which is about to be changed or shattered by an inciting incident that sends you protagonist hurtling through the story.

3 – The Back Story card. This card shows the basis of the story. An event that happened before your story began that has set things in motion. Because of the event in this card, circumstances are unfolding that on a collision course with your main character. This collision happens in the next card.

4 – The Inciting Incident card. The event that gives your main character a kick up the backside and sends them out of their comfortable normality and into the story along a path suggested by card 6.

(The next two cards are explained out of order, because they make more sense to the spread this way around.)

6 – The Direction card. The path that the main character initially sets off along towards their goal.

5 – The First Act Outcome card. What the main character achieves at the end of the first act or the situation that they are in at that point. After this the story will take a turn in a new direction.

So far most of the cards have focussed on the main character and getting the story started. For me that’s often enough of a story seed for the ideas to start sprouting and rioting in my imagination. But the next four cards help suggest some structure for the second and third act of your story.

7 – The Protagonist card. So we saw the protagonist at the start of the story, where they were both internally and externally. They have followed the path that they were pushed down by the inciting incident to a first act climax. Until that point the protagonist has been controlled by events. Now, in the second act, the protagonist makes a decision on how to go forward. How the protagonist goes forward from this point is suggested by this card.

8 – The Antagonist card. What good would a story be without a villain? This card suggests the main antagonistic force that is preventing the main character from reaching their goal. The antagonist can be a person or a set of circumstances.

You’re reaching the end of your story. How do you want things to resolve in the third act?

9 – The Reversal card. In the Celtic Cross spread this card is listed as hopes, fears or the unexpected; in the Fictional Cross I go with that last meaning: the unexpected. Things can’t just wrap up neatly, there should be a twist in the tale. At the point where the protagonist thinks they have it all worked out and the ending is in sight, something pops up and sends the ending spinning.

10 – The Resolution card. H ow does it all end? When the dust settles, what is the situation that the protagonist finds themself in?

The diagram below shows how I relate this idea generation spread to the traditional three act structure of storytelling.

Give it a try. Let me know how it works out for you in the comments.

A Simpler Spread for Story Generation

Use this spread to generate an idea for a full plot.

‘Writing a Novel’ by Nigel Watts describes the narrative structure as an 8-point arc. Those eight points from the beginning to the end of a story are:

The Stasis card depicts the situation before the story begins. It is crossed by the Trigger card, which signifies the event that sets the story in motion. Next follows the Quest card that suggests the course of action that the protagonist embarks upon as a result of the triggering event.

The Surprise card suggests an event that occurs to throw a spanner in the works and send the plot spinning in another direction. In reaction to this surprise the protagonist must make a Critical Choice about how to proceed. The critical choice is depicted by the card crossing the Surprise card.

As a result of the protagonist’s choice the climax of the story is reached – everything comes together and appears to be resolving in a certain way. The Climax card suggests how this plays out. It is crossed by the Reversal card, which suggests an event that changes the fortune of the characters involved in the climax and paves the way for the resolution.

The Resolution card defines the new stasis – the way everything shakes out after all the excitement is over.

For this, I particularly like The Collective Tarot.  A tarot deck that is queer-, kink-, and poly-friendly, sex-positive, fat- and disability-friendly, anti-hierarchical, non-authoritatian, and radical, collectively and collaboratively created, and absolutely beautiful. Of as they put it:

What makes it amazing is the sizable book that comes with the deck, helping you interpret the cards you pull.  If you want something pretty different for either creating stories or gaining magical insight into your world, try to track down a deck of  the Collective Tarot.

Games as a Strategy for Living (and Liberation)