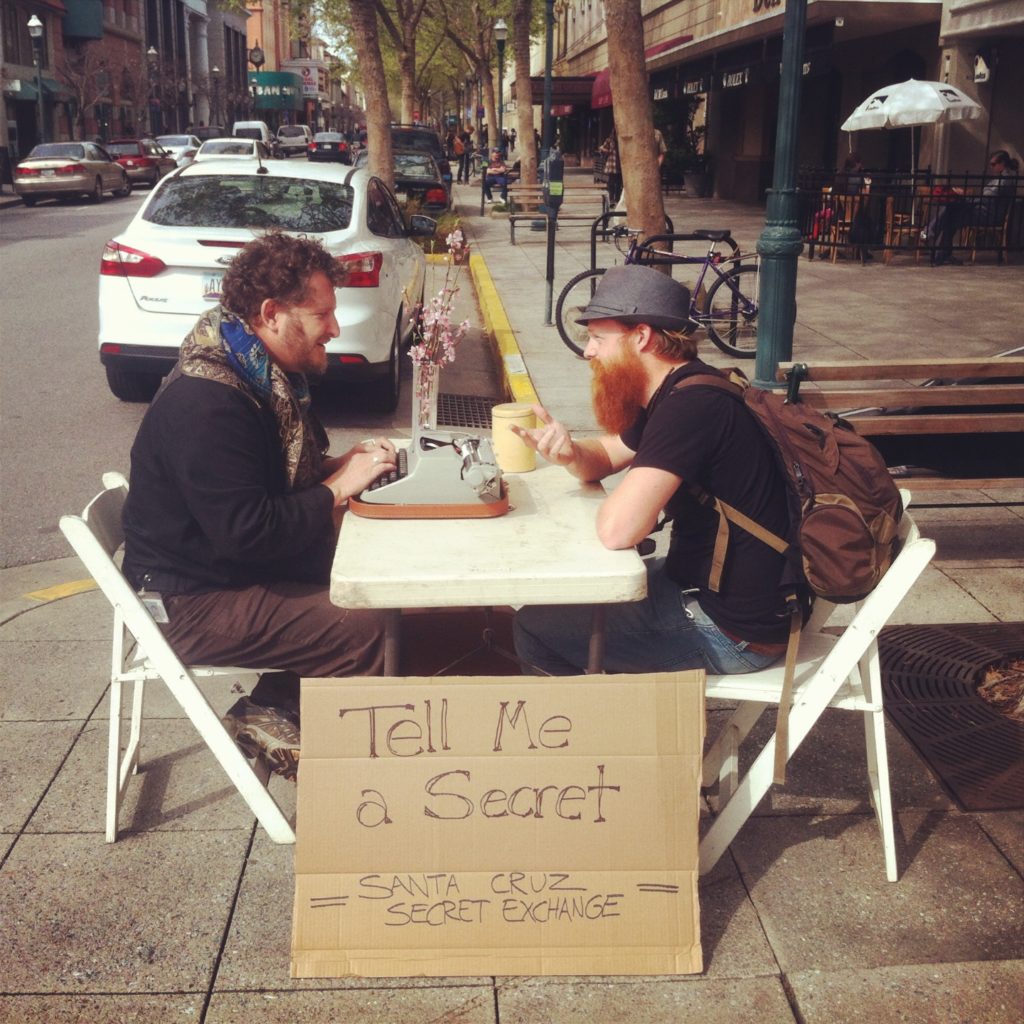 Secret Exchange invites people to share their secrets with strangers. A table and two chairs on a downtown street corner, and a sign inviting people to sit down and share a secret. People could tell their secret:

Secret Exchange engages the themes of intimacy, sharing, and public space. It invites strangers to break down barriers and share their most intimate secrets. It is an unexpected and unconventional interaction in public space, challenging the exclusivity of commercial relationships on the street.

In a broader sense, Secret Exchange is part of a series of interventions that reconceptualize who is the public in public space and what can they do there. We reintroduce sharing in the context of continuing enclosure of the commons, including privatization of public lands and space, fencing off of intellectual property, and even the patenting of genetic code.

In Santa Cruz for instance, in public space, you cannot legally sit or lie on the sidewalk or on planters, sit or loiter within 15 feet of any building, trashcan, sculpture, information display, or crosswalk, or within 50 feet of any change machine or ATM. You cannot sit on a park bench longer than one hour. Meanwhile, the city leases the public sidewalk to private companies restricting who can use public space.

Secret Exchange subverts the assumption of the exchange economy, asking only that people share a secret in exchange for a secret.

Secret Exchange is part of the Para-Sites Distributed Exhibition:

Para-Sites is an alternative exhibition project where given modes of production, circulation, and consumption are “hijacked” or re-appropriated for creative purposes. It is a network of distributed practices that operate in the same time frame with a common theoretical and tactical approach. This project starts from the realization that there is a significant lack of platforms and opportunities to show and promote nonconventional and noncommercial creative practices and that such practices can better encounter participants and build a network without relying on the traditional gallery system and its physical and economic constraints. We are interested in reappropriating conventional ways of using or occupying public spaces, systems, or mass-produced commodities for unexpected purposes, which may denaturalize routinized patterns of everyday life. By twisting common assumptions or repeated habits of the everyday, we attempt to disturb how things are supposed to be and how we are expected to live and communicate.