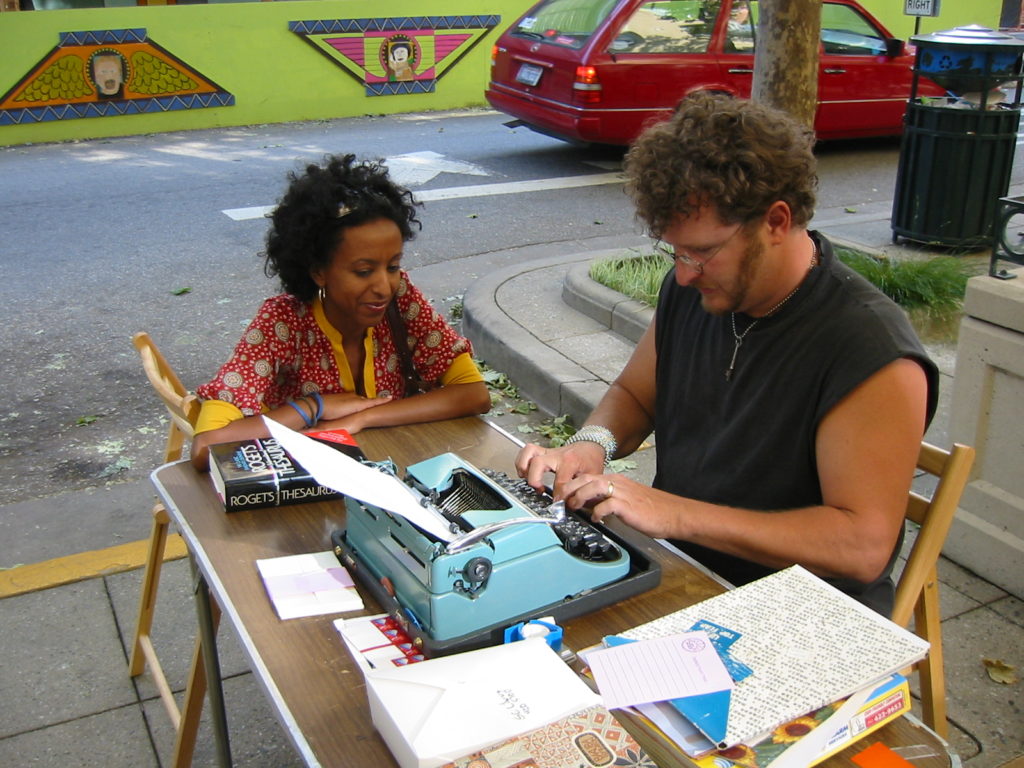 Episodically between 2008 and 2011, I did a streetside letter writing service with friends.

The idea was simplicity itself: A letter writing service springs up on Pacific Ave, offering free typing/dictation of love letters, apologies, and blackmail.

I got numerous love letters, a few apologies, several blackmails, and one emotional cease-and-desist letter. After struggling to handle one smoking blackmail letter to a national leader without getting fingerprints on it, my client brought a pair of rubber gloves for each of for future blackmails.

Here are some impressions from my co-performer, Bonnie Primbsch:

Wes and I finally did the love letter (apology/blackmail) letters service downtown yesterday. We decided to be rival services set up right next to each other, throughout the day played at being huffy and competitive about the other guy and alternately tossing stamps, envelopes, typer correction tape to each other.

A swell time, about 3 hours. Lots of requests for us to come back, and the usual incredulity from normals that such a thing should be happening. We refused a few dollars people kept offering for the stamps.

We had solid business the whole time with clients sitting on our chairs dictating letters constantly. While everyone was uniformly impressed, the folks who told us it the coolest thing they’d ever experienced outnumbered the curmudgeony easily three to one.

I did one for a woman who was thrilled at her spanish speaking study partner, so we attempted a letter in Spanish, very Gabriel Garcia Marquez. Also a letter of appreciation for a Mom, an affirmation note to oneself the sender will receive, a snide “love note” to the cardswiper at the dining hall (no respect! no respect!), a thank you note to a moneybags producer of this guy’s documentary, and an earnest “I want you in my life” note that a communitarian from Eugene wrote for the woman he’d met the night before at a co-op convention. I made him swear on one leg with one hand in the air and one eye closed that he’d persue a described plan a, b, and c to hand-deliver the note, since he doesn’t have her address.

We were visited by Chris, one of the downtown hosts, whose chief concern was whether we were doing anything illegal. I’ve met him before when we were downtown when we had set up a free coffee cart across from a corporate caffeine-monger. He is one of those petty tyrants with a friendly manner who say they support you but are forced to bust you because the law (which naturally they don’t agree with) is the law. Whatever. It is hard to take the downtown  greenshirts very seriously. Bonnie wanted to ask him if his job was to prevent things from happening downtown, or to be a host for the wonderful things that can happen there. I didn’t feel like I needed to ask because I think I already know the answer.

The entire endeavor, providing a free typing service, made me want to do enough of that sort of thing in the future that people were no longer surprised that there was something free and fun to do downtown, and enough so that people’s impulse was no longer to wonder how much it cost.