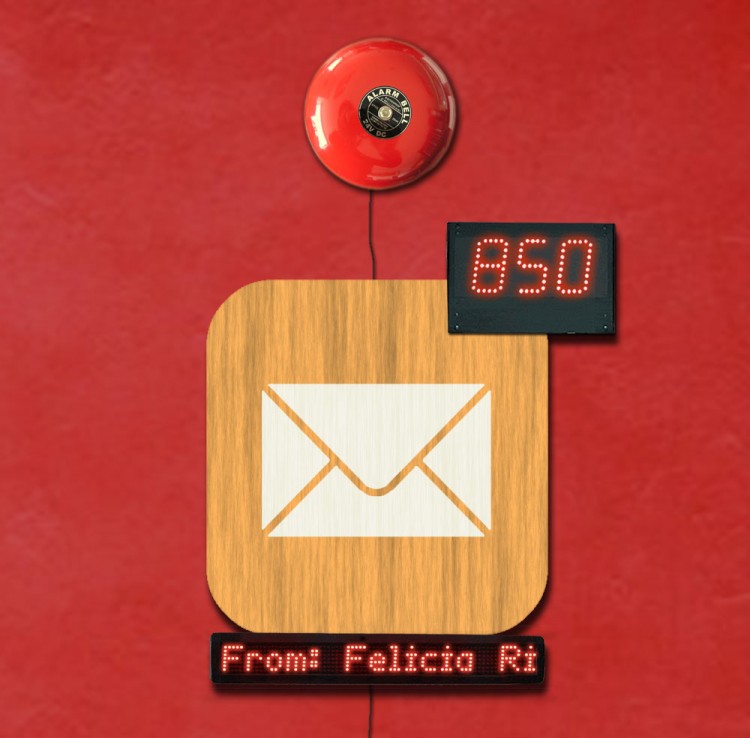 FOMOphobia is a network-connected installation that immerses the viewer in a visualization of the artist’s real-time social networking anxiety, sounding alarms and keeping count of unhandled content.

Like a lot of people, the artist faces a very 21st Century First World Problem: The guilt of not being able to keep up with all the communications from all his devices and social networks. Blog comments, calendar reminders, email, Facebook, Flickr Mail, friend requests, Goodreads, LinkedIn, Instagram, OKCupid, RSS feeds, SMS, Twitter,voicemail, Yelp activity, and on and on. Anxiety over missing important information is termed FOMO, or Fear of Missing Out.

A device was recently featured on Hackaday which displayed one’s unread email count in large glowing letters. It was pitched as a helpful convenience, a clever way to see whether you need to drop everything and check your email. To the artist, it looks like guilt made manifest.

Like social media itself, FOMOphobia simultaneously attracts and repels. The installation features individual monitors for each of the most prominent social media and comfortable chairs from which to observe the piece.  Each monitor consists of a prominent numeric LED counter of the number of unread or unhandled items, paired with a clangorous electric bell that sounds whenever the number increments.

Additionally, a single line LED display scrolls through messages as they are received exposing the content of the artist’s social networking.  The artist shares not only his anxiety about accumulating social media, but the very content of that media, creating a captivating vulnerability and striking an empathetic chord with viewers.

Here is a digital concept sketch that shows most of the elements.

The installation would consist of discrete modules, one for each form of social media. New monitors could be added with relative ease. Together, they would create an audio-visual manifestation of modern communication angst, an insistent cacophony of social networking.

Each monitor consists of:

The current plan calls for a central internet-connected microprocessor to connect to each of the social media sites to get counts and content. This central master unit would connect to slave processors that would increment the counters, display the media contents, and ring bells.

Currently, a Raspberry Pi could serve as the master unit with Tennsy microcontrollers or Arduinos serving as slave units. The numeric and alphanumeric signs have their own processors and accept serial communication for input. A microprocessor-controlled relay can handle the electric bell.

Possibilities abound in the form of social media dashboard for connecting to social networking services without laboriously writing new APIs and screen-scrapers. Some of these include HootSuite, Seesmic, Myweboo, Digsby, and Threadsy. More analysis is needed to determine requirements with which to compare each of these services.

Originally, I considered the possibility of viewers providing their credentials to their own social media so that the system could share the anxiety by reminding them how much social networking they’d left undone. However, by displaying the content of my social media as well as the anxiety about it’s accumulation, rather than providing direct experience to viewers, the installation instead asks for an empathetic reaction from viewers.

The cost of the materials may be more expensive than my modest artist’s budget allows in which case a small grant from an on-campus source may be sought. Though I plan to get many of the materials for the project donated, if possible.

Fear Of Missing Out (FOMO) is a recently-recognized form of social anxiety. Wikipedia describes it as “ compulsive concern that one might miss an opportunity for social interaction, a novel experience, profitable investment or other satisfying event. This is especially associated with modern technologies such as mobile phones and social networking services.”

FOMO is present for many of us living lives steeped in 24/7 networked technology and is currently a hotly-discussed topic in the media. Recent articles about FOMA and related stress and anxiety were covered in the New York Times, Oprah, Wall Street Journal, and the Huffington Post.

Wikipedia cites a study by Andrew Przybylski which concludes that “the condition was most common in those who had unsatisfied psychological needs such as wanting to be loved and respected.” The study laid the blame on “social networks such as Facebook and LinkedIn, which provide constant opportunity for comparison of one’s status.”

Here is a very rough timeline of the project:

Here is a preliminary budget that does not take donated material into account:

Development costs are minimal since programming and production are part of the artist’s MFA work. There is no expectation of hiring consultant or development help.

Currently, no resources or monetary support beyond the artist’s personal funds are committed to the project. Possible funding sources include:

FOMO is the result of our bombardment by modern networking, more insidious because we take an active part in it, simultaneously stressed out about and perpetuating our own addiction.

FOMOphobia brings this private guilt to the surface with glaring numeric displays and alarm bells. It exposes the artist’s social networking burden and addiction, revealing both the accumulation and content of his social media messages. FOMOphobia provokes viewers to re-weigh the value of their relentless connectedness.

One thought on “FOMOphobia: An Insistent Social Networking Anxiety Monitor”